BVU in the News: Business Volunteers Unlimited helping nonprofits to diversify their boards of directors 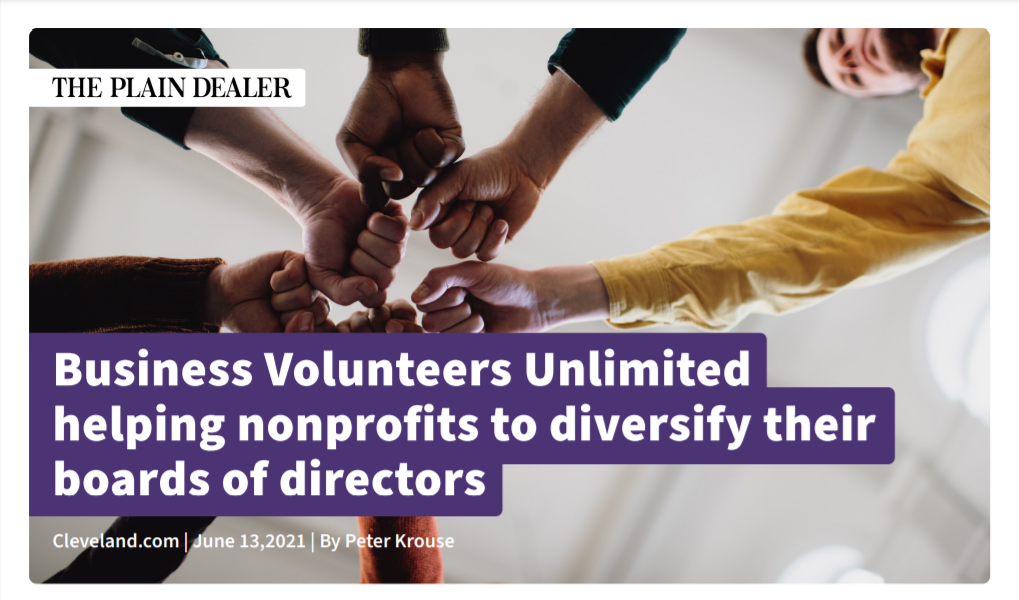 CLEVELAND, Ohio – Northeast Ohio nonprofits are making a push to diversify their boards of directors, and one place they turn for help is Business Volunteers Unlimited.

That’s where Towards Employment, an organization that helps disadvantaged adults find jobs, found two of its newer board members, both of whom are Black.

“These are tremendous additions to our board who bring great skill sets as well as representation,” said Jill Rizika, executive director of Towards Employment.

Diversity of all kinds is important, Rizika said, and with her organization that includes board members whose “lived experiences” can help shape services for its primarily African-American clientele.

Business Volunteers Unlimited recruits and trains local professionals to serve on a variety of nonprofit boards.

In recent years, about 15% of the professionals it has matched with nonprofits have been people of color, said Elizabeth Voudouris, the organization’s president and soon-to-be chief executive.

While the organization has long emphasized recruiting minorities, the effort took on greater urgency last year amid social unrest unfolding across America and demands for racial equity.

Clark said that when he was still working, he relied on Business Volunteers Unlimited to help find non-profit board positions for his bank employees, including minorities.

“I just completely agree with what the minority pipeline is trying to do,” Clark said, especially now that many organizations are looking to seed their boards with the next generation of leadership.

Not only does Business Volunteers Unlimited vet professionals to see which non-profit boards would make a good fit, but it helps them understand what’s expected as a board member, so they don’t have to spend as much time getting acclimated.

“I think that’s a big strength of this program,” said Clark, who recalls being lost at times when he joined boards in the past.

Randy McShepard, who chairs the task force, said it’s also important for non-profits to understand what it means to be inclusive and to not just “check the box” by appointing a minority board member and then moving on.

He’s read that boards should have multiple minority members to gain benefits because being the sole minority on a board can be daunting.

“I can attest that it is a lonely experience,” said McShepard, vice president of public affairs and chief talent officer for RPM International. One year he received 22 requests to serve on non-profit boards.

“There is no honor in that for me,” McShepard said in a 2008 Plain Dealer article. “It saddened me to see so many organizations so limited to me that they can’t see the many talented people who are out there.”

McShepard discovered several other black professionals had similar stories, leading to the creation of the Minority Pipeline Initiative in 2008.

It quickly made a difference, said Brian Broadbent, retiring CEO of Business Volunteers Unlimited, with minorities representing 19% of the successful matches the following year, up from 7%. The percentages have bounced around since then, he said.

The re-emphasis on diversity at Business Volunteers Unlimited comes as Broadbent steps down as CEO, having already given up the role of president to Voudouris in January 2020, as part of a gradual transition at the top.

Broadbent said Voudouris, who has been with Business Volunteers Unlimited since its inception, leads the organization’s training efforts and “has a real heart for diversity.”

While the public may be focused on the need for diversity in government, he said, “we also need the philanthropic community, we need the private sector, we need everybody to embrace diversity.”