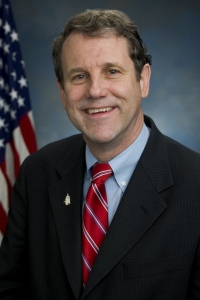 Learn of Senator Brown’s current priorities as they relate to the interests of nonprofits; Dialogue; and Network.

We are thrilled at the opportunity for Senator Brown to meet our community’s nonprofit board and staff leaders and for us to hear first-hand his current priorities.  A few of his priorities that relate specifically to the nonprofit sector include the economy and jobs, education and workforce development, affordable housing, the revitalization of neighborhoods, protection of natural resources, healthcare, and seniors.  A question and answer session with the audience will follow Senator Brown’s remarks, along with networking with one another.

This complimentary program is directed to board members, chief executives and staff of nonprofit organizations.

Since January of 2007, U.S. Senator Sherrod Brown – a champion of middle-class families in the Senate – has held more than 300 community roundtables across Ohio’s 88 counties with students, local leaders and business owners, entrepreneurs and educators, workers and families to find ways to rebuild our economy.

Described as “Congress’ leading proponent of American manufacturing,” Brown supports a national manufacturing policy that would invest in manufacturing innovation, strengthen our component supply chain, connect workers with emerging industries, and align our trade policies to promote our national interests. He is also working with Ohio’s universities, entrepreneurs, and community stakeholders to use Ohio’s resources to create new jobs in high-growth industries and make Ohio a national leader in clean energy manufacturing.

And as a long-time advocate for fair trade, Senator Brown has stood up to presidents of both parties on shortsighted trade agreements that ship U.S. jobs overseas. He led the bipartisan opposition to NAFTA in 1993 – as a freshman in the U.S. House of Representatives – and to CAFTA in 2005. Sen. Brown is working on trade policies that promote our workers, small businesses, and manufacturers while creating jobs and expanding markets through an aggressive export promotion strategy.

Informed by his faith as a member of the Evangelical Lutheran Church in America (ELCA), Sherrod Brown is committed to social and economic justice. He helped pass the historic health care law that will make health insurance more affordable and accessible for American families. This law also provides strong consumer protections that will prevent insurers from placing limits on the care patients receive and discriminating against consumers based on age or pre-existing health conditions.

He has also joined with officials and community partners in cities across Ohio to rise to the White House’s My Brother’s Keeper Challenge to expand opportunities for boys and young men of color. Through mentoring relationships and education events, this initiative strives to ensure that all of our young people receive a quality high school education and graduate with the skills and tools needed to advance to postsecondary education or training.

Senator Brown serves as the Ranking Member of the Senate Banking Committee, where he played an instrumental role in passing the historic Wall Street reform law. He also serves on the Senate Committee on Finance.

Brown is also the first Ohio Senator in 40 years to serve on the Senate Agriculture, Nutrition, and Forestry Committee, where he has been instrumental in strengthening the farm safety net and addressing childhood hunger.  He served Chairman of the Subcommittee on Jobs, Rural Economic Growth and Energy Innovation.

Senator Brown has fought for our veterans, servicemembers, and their families throughout his career. He secured $15 million to build the Ohio Western Reserve Cemetery for veterans, in Medina County. From his position on the Senate Veterans’ Affairs Committee, Brown has advocated for veterans training programs to ensure returning servicemembers have access to good-paying, high-demand jobs. He is the only Ohio Senator ever to serve a full Senate term on the Veterans’ Affairs Committee.

Prior to serving in the United States Senate, Brown served as a United States Representative for the 13th District, Ohio’s Secretary of State, a member of the Ohio General Assembly, and has taught in Ohio’s public schools and at The Ohio State University. An Eagle Scout, Brown is a native of Mansfield, Ohio, where he spent summers working on his family’s farm.  He is married to Pulitzer Prize-winning columnist Connie Schultz. They reside in Cleveland, Ohio, and have three daughters, a son, a daughter-in-law, three sons-in-law, and seven grandchildren.

Senator Brown speaks with nonprofit board leaders and staff, including Q & A dialogue.

This event is FREE for all attendees.

Please note: Bring your ID.  Upon arriving at Key Tower, go to the Security Desk in the southeast corner of the lobby and present your ID for a photo.  It is made into a name tag. Please allow ample time for parking and the Security process.  Thompson Hine is located on the 39th Floor of the Key Bank Tower.